'Must Have' Shopping Bags

Oh my goodness!!!!!!!!! it's been so long since I last posted and so much has been going on that I haven't had one minutes rest since then. It's a long story so I'll try to make it quick so as not to bore you but I had intended on going to the craft fair with all my things but one night I had dozed on the sofa and was woken by a loud crashing sound. My son was in the kitchen cooking something for himself and the first thought that came to my mind was the cooker had exploded LOLL. After checking on him and seeing everything was fine I heard the loud noise again only this time I noticed it came from my sewing room. I then thought I had left the iron on and it had exploded, a bad habit I have. I went to check and was horrified to see that part of the ceiling in my sewing room had fallen down. The mess was everywhere, on my cutting table where I had been working in my thread draw, everything was a mess. The wet room is above the sewing room and a leak had caused it.

Luckily I have a large sitting room upstairs that was empty and never got used except for a treadmill in it so I set upon the task of moving everything up there. It took a couple of days and left me exhausted. Thinking this was Gods way of telling me to have a rest from sewing I resigned myself to the fact that I should take a break. Well that lasted less than 24 hours and I was back at my sewing machine again. Since then I've been waiting on workmen to show up and my sewing room still needs to be repaired. When it is I don't think I'll be moving back down there again though as I have twice the space in my new room and can't be bothered to move everything again.

Because of this I've had to put testing bags on hold for now as I can't concentrate with all that's going on. Having said that I did accept to test a clutch which is so cute and becasue I know that the designers pattern is so good that it would be easy and quick to test.

Back in February before all this happened I was over the moon to be accepted as a tester by Geta Grama of Geta's Quilting Studio. I've been a follower of her blog for ever and admire her beautiful quilting. She has loads of great tutorials and also makes wonderful bags which are very simple designs but so striking and beautiful. These that I tested are shopping bags, again very simple to make especially compared to what I'm used to making but I believe there is always something that can be learned no matter how simple a project and this was the case with these. Check out the above link where you can see Geta's shopping bags and also a tote bag which is gorgeous and you can buy that pattern too. I can't wait to be able to make one of those.

These are supper quick to make and really easy. The one standing up is made from a waterproof fabric that is from Spain. I bought the fabric ages ago becasue it's in the colours I love and it's from my home country. This one has boxed corners where as the other one doesn't. I've been using them ever since and they are really strong and so handy. I never leave home without them. I just fold them up and put them in my bag. 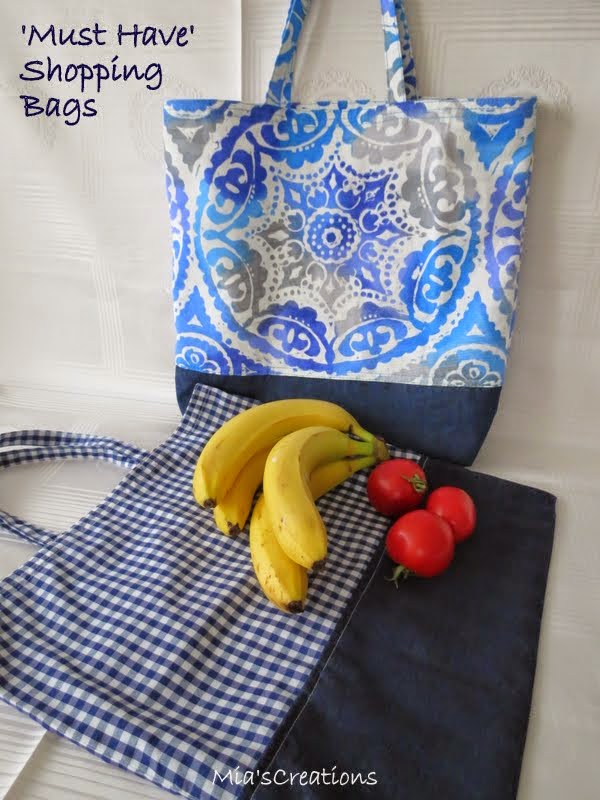 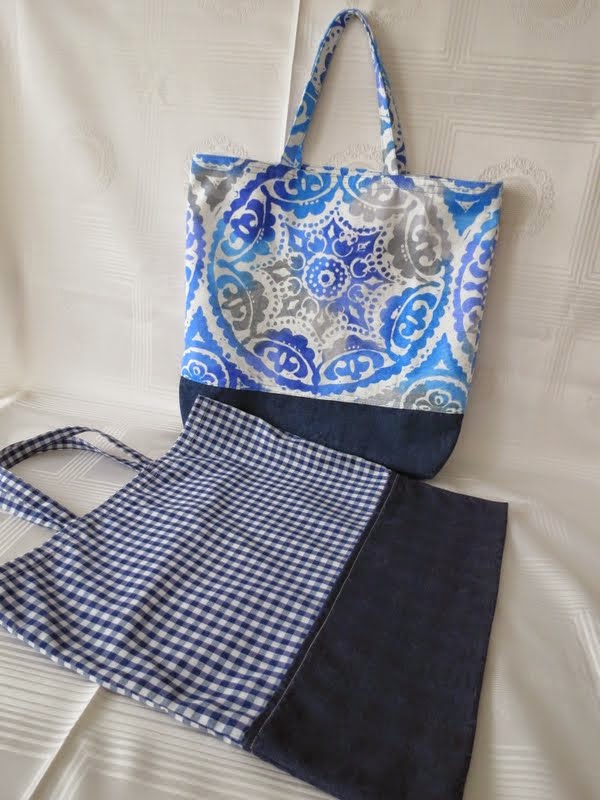 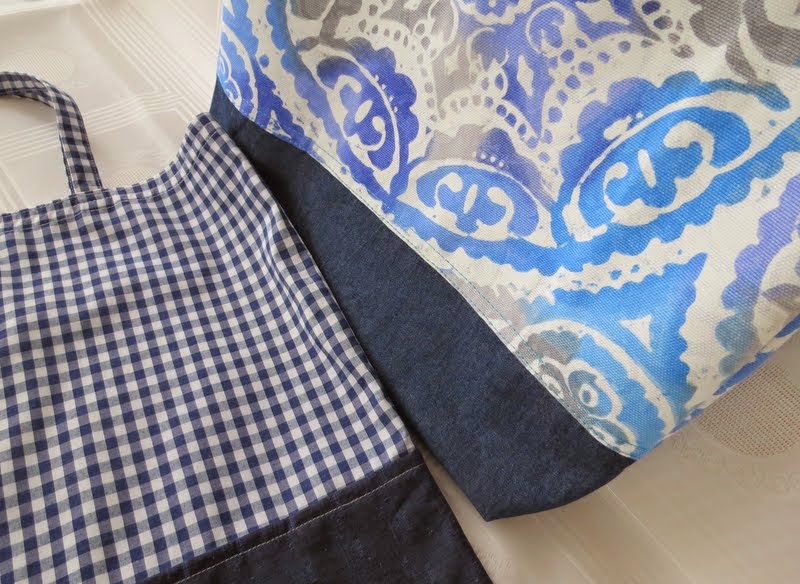 These bags have no interfacing or lining just an outer fabric but what makes them really nice is all the seams are neatly finished off so there are no raw edges. This is the part that was new to me. I had seen these seams before but had never made them. 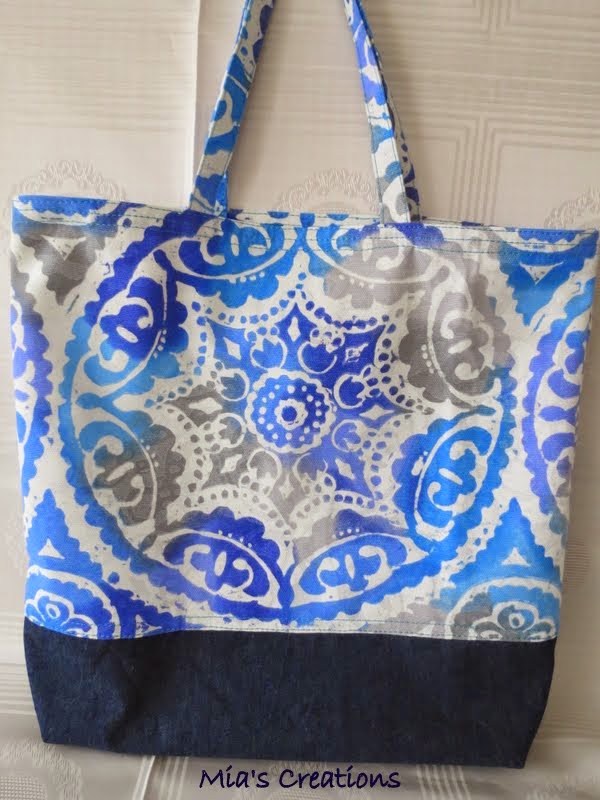 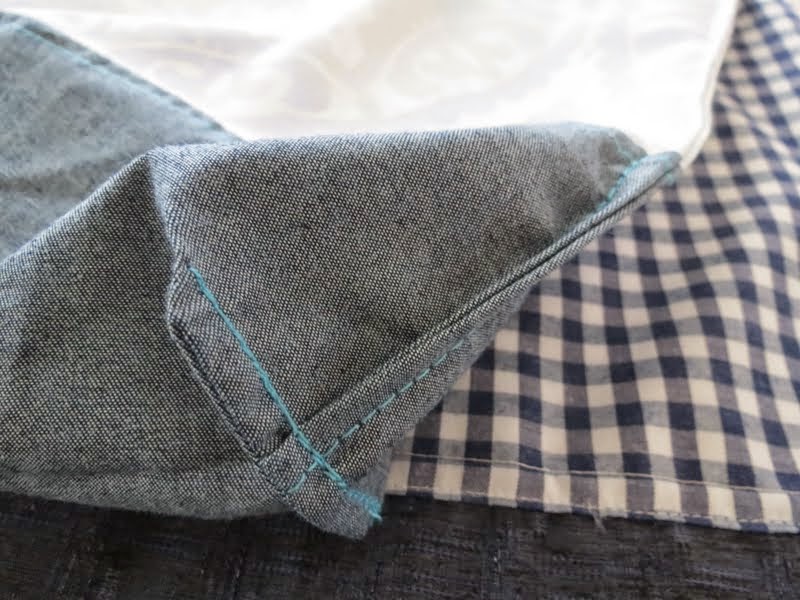 These are great to keep in the car when you go shopping. You could make a whole bunch of them so you don't have to put things into plastic carrier bags. Good for the environment. You can find the pattern HERE. Geta has also made these in faux leather in various colours which you can also see in the link for the pattern and the colours she's used are gorgeous. Also check out all the TUTORIALS. I'm really looking forward to be able to test more bags for Geta in the future. She was looking for testers for her quilt pattern but that was a bit out of my league but who knows maybe one day I'll be good enough to test one of those too.

Thanks for sticking with me to the end of this post. What started out as a disaster has all been for the best. I have a new bigger sewing room and a shop is now selling mine and my daughters work and nobody else's. I'll post about that another time with some photos for you to see. More good news is my daughter has been published in a magazine and her work is on the cover of the first issue. She's been doing tutorials for the magazine and I also did a tutorial for my fabric hearts which has also been published in the same magazine. For those of you who've sent me emails I'm sorry if I haven't managed to get back to you. I'm not on my laptop much these days with all the sewing I have to do but I think in about three weeks to a months time things will slow down a bit.

I've really missed visiting all the blogs I follow and hope to find the time soon to visit those and see what I've been missing out on.

Again thanks to all of you for stopping by.